When everything you do turns out differently than you planned, how do you deal with that? Is God just “messing” with you? Or does He have a bigger picture in mind? That’s a question I asked myself over and over until it finally sunk in. I now understand.

Perhaps you won’t mind if I tell you my story. Much of it doesn’t make sense until you get near the end. God blindsided me with the realization of who I really am. I couldn’t figure it out until a wonderful church gave me an honorary “degree.”

For many people, life takes unexpected turns. In some measure, this describes God’s path of life for me.

It started when I was a pre-med student at Wheaton College in Wheaton, Illinois, anticipating a medical career. After graduation in 1962, and in need of finances, I worked in Chicago’s Children’s Hospital, while dreaming of becoming a pediatric surgeon. During this time, my walk with the Lord took a positive turn and slowly He changed my desires toward ministry rather than medicine. This was the first unexpected turn: God moved my heart to pursue seminary instead of medical school.

My wife Karilee often quips that she thought she was marrying a rich doctor but ended up marrying poor pastor. Joking aside, we ultimately made the decision together to change my career and have never looked back. God had revealed His will through prayer, Bible study, careful thought, and meaningful conversations.

After completing my four years of education at Dallas Theological Seminary, I felt led to teach Bible in a Christian college. So I made application for a teaching position at a Bible college in northeast Pennsylvania and eagerly awaited a response. I never received a reply concerning that application. Disheartened, I reluctantly took a job in landscaping with my wife’s uncle in Madison, Wisconsin. I spent that summer laying sod, attending a Baptist church on the west side, and sending out numerous résumés.

Early that fall, the pastor there approached me—would I be willing to consider becoming their youth pastor? The church was growing and they desperately needed someone to work with the youth. It wasn’t exactly what I was looking for, but I took the job. The Lord quickly convinced me this was another unexpected turn of His making. I actually loved what I thought I wouldn’t like.

Working with junior and senior-highers was an absolute pleasure. Karilee and I made lifetime friends in those years. An outreach ministry to college students at the University of Wisconsin developed naturally, soon mushrooming into over 300 students, along with Bible studies with several Hippie groups. Far beyond my expectations. What at first seemed to be an intrusion into my plans became the desire of my heart.

And then it happened again.

The senior pastor accepted a call to a church in another city, and our church turned to me to guide them through the transition. As interim pastor, I now added preaching twice every Sunday to my already full schedule with the youth and college kids. But before long, the church leaders invited me to become their senior pastor.

As an aside, years before—prior to entering seminary—I had decided I didn’t want to be a pastor. My heart was in teaching. Additionally, my father was a pastor and I had witnessed up-close-and-personal all that was involved in pastoring a church. Still, once again, God changed my heart and I accepted the unexpected.

Eventually I left the Madison church, with teaching full-time still deep in my soul. I felt God was definitely leading me to obtain an advanced degree to qualify for a teaching position. Our church was healthy—having outgrown its present facility—and was looking to build or relocate. It seemed a good time for me to leave. I returned to Dallas Seminary and began working toward my doctorate.

Yet it was again time for me to learn another unexpected lesson in discovering God’s will. With a wife and two young children, I needed to work while going to school. Prior to moving to Dallas I had experienced two consecutive ruptured disks, entailing two surgeries and a long period of rehabilitation. Now in Dallas, I couldn’t find work. Insurance companies wouldn’t insure me because of my medical history, and management wouldn’t hire me because of it.

Eventually I landed a job as doorman at a prestigious high-rise apartment complex for the wealthy. I opened doors and carried groceries for the tenants. I also parked their cars—a definite upside because I was driving Mercedes, Jaguars, a Lamborghini, and several Rolls-Royces. Unfortunately, living on tips, and with no benefits, I could not meet the bills. I had to drop out of the graduate program.

The Lord was about to teach me something important.

I secured a paying job as night watchman at a meat packing plant. For months I sat in a 4 x 5′ guardhouse, making periodic scheduled rounds to check the truck refrigeration units. Humbled, I spent long hours with the Lord in the dark. I was discouraged and battling resentment. I was lost and didn’t know what to do. In fact, what do you do when you don’t know what to do? The answer is simple but hard: You pray and wait on the Lord.

Little did I know that a friend had submitted my name to a hurting Orlando church looking for a pastor. The church invited me to come speak and later asked me to come as a candidate. Then they called me to become their pastor. I gladly accepted.

In this, I learned a valuable lesson. God’s sometimes leads through difficult times, but His love never wavers. We can (and should) trust Him, no matter what. We are His beloved children. We are never out of His sight or beyond His care. We can trust His sovereign will—always!

A decade later, the Lord used the unexpected once again. I received a phone call from the Dean of Education at the very Bible college in Pennsylvania to which I had applied years ago upon graduation from Dallas Seminary. The story behind why I had not heard from the college is intriguing. My application had fallen behind a file cabinet, only to be found years later when the Bible college moved from New York to Pennsylvania. God’s ways are higher than our ways, and His timing is always perfect.

I was invited not only to become a professor there, but also to chair the Department of Pastoral Ministries. God had orchestrated an opportunity to train the next generation of pastors! Overwhelmed, I realized my circuitous path in the will of God had ultimately led me straight to the desire of my heart. Psalm 37:4 — Delight yourself in the LORD, and He will give you the desires of your heart.

For four years I taught young men how to preach, pastor, lead, and counsel in the local church. I exhorted them to walk with the Lord, to concentrate on the exposition of His Word, and above all, to keep Christ central in all they did. When it’s always about Jesus, by default it’s never about you. It’s that simple. To this day, many previous students stay in touch with me, expressing thanks for the influence I had in their lives.

I never thought I would leave that school. But in the providence of God, another unexpected circumstance arose. My father passed away leaving a complicated estate for me (the executor of his will) to settle. I took a year’s leave of absence from the Bible college fully intending to return.

During that sabbatical year I traveled and spoke in various places, one of which was a Bible conference in Grand Haven, Michigan. While there I had the privilege to view the amazing Van Kampen Bible collection—the largest privately held collection of old Bibles, manuscripts, and ancient artifacts in the world. As a result of that conference I was invited to come to their church as senior pastor. The offer included participating with Robert Van Kampen, an elder in that church, in the ministry of his family’s Bible collection. The Lord strongly led me into that incredible opportunity; thus, after completing the task of settling my father’s estate, I became senior pastor of Grace Church of West Ottawa in Michigan.

Four years into my pastoral ministry, Bob Van Kampen died unexpectedly. I had the honor and privilege of doing his funeral. In an intertwining of events, God moved in such a way that the Bible collection was incorporated as an integral part of the newly constructed Christian/Holy Land themed park in Orlando: The Holy Land Experience, jointly conceived and built by Bob Van Kampen and his good friend, Marvin Rosenthal. In 2001, Karilee and I were one of thirteen families from Grace Church to move to Orlando in pursuit of displaying the Bible collection in honor of Bob Van Kampen. For the next twelve years I served as Director of Biblical Research and Education at the Scriptorium: Center for Biblical Antiquities. The position brought to me a further unexpected blessing—I began to write books and develop biblical resources.

Permit me to share a special story—something that took place in the mid-1990’s as I taught at the aforementioned Bible college. During this time, a church in the Finger Lakes region of New York asked me to come on weekends to their church as interim pastor. They were in the midst of a very difficult time in the aftermath of the dismissal of their pastor due to serious moral failure. As a college professor I had weekends off, so I agreed.

For a full year I simply exalted Christ in my preaching and while working with the leadership. I knew if the people focused their eyes upon the Lord instead of themselves, He would bring the needed healing. A spiritual revival took place, and at the end of the year they were able to call another pastor. My last Sunday there, at the end of the evening service, the congregation presented me with an honorary “degree” written in beautiful calligraphy: “We the church family of First Baptist Church of Horseheads, New York, hereby confer upon Daniel Robert Hayden the honorary degree of Doctor of Church Medicine.” 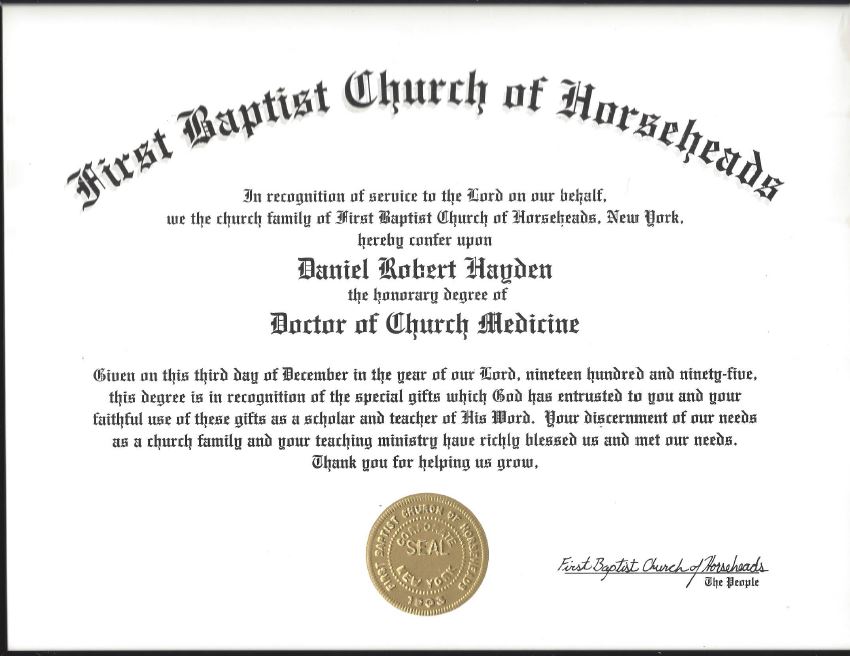 This is how a hurting church honored me for allowing God to use me to bring healing to their congregation. Of the several degrees I have received—only this one hangs on my study wall. It reminds me every day that God’s call upon my life is to bring healing and encouragement to others. I began my career wanting to be a doctor; God honored that desire by allowing me to become a “Doctor of Church Medicine.” After all, I now have a degree to prove it!

There is another lesson here. My father pastored the same Long Island, NY church for 50 years. On the other hand, the Lord’s will for me has not been longevity in one place, but a series of places where He used me to teach, exhort, and encourage God’s people. God’s will is never the same for everyone, but it is always best for each of us. When we “get out of the way” and allow Him to lead, we can expect the unexpected—a life filled with both happy and hard surprises—but always filled with blessings.

Perhaps this short biography of my ministry experience has encouraged you. Remember—when circumstances change and you don’t know what to do, just pray and follow the Lord’s leading, whatever it may be. God is always good to those who love Him (Romans 8:28), and who knows? He may surprise you with an unexpected journey that fulfills exactly who you are.